Skip to main content
Letter from the editor
Issue #70: Editorials 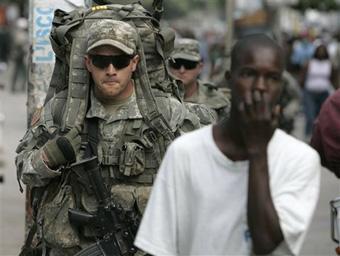 THE U.S. invasion of Haiti in January has been presented as a grand humanitarian gesture on the part of a country uniquely committed to helping the world. It fits neatly into a scenario aimed at putting American military intervention in a more flattering light in the wake of Bush’s (and now Obama’s) increasingly unpopular wars in Iraq and Afghanistan.

However, as Ashley Smith points out in his analysis of the history and politics of U.S. intervention in Haiti, this presentation of events is dubious not only in terms of the “facts on the ground”—more than a month after the quake, half of the 2 million people affected by the quake were still not receiving food relief—but also in terms of the historical record of U.S. intervention in Haiti and the rest of the region.

“The United States of America has helped underwrite global security for more than six decades with the blood of our citizens and the strength of our arms,” intoned Obama in his Nobel Peace Prize speech. “We have done so out of enlightened self-interest—because we seek a better future for our children and grandchildren, and we believe that their lives will be better if other peoples’ children and grandchildren can live in freedom and prosperity.”

This is an old tale told by virtually every president since the U.S. emerged as a great power in the late nineteenth century. “It is our duty toward the people living in barbarism,” Teddy Roosevelt once wrote, “to see that they are freed from their chains.”

But as Shaun Joseph notes, the record of U.S. intervention in the Caribbean is one of using economic blackmail and blunt force against weak nations—in the words of Major General Smedley Butler, “for the benefit of Wall Street”—whatever the excuse offered to justify it.

The efforts of the Egyptian government to thwart the solidarity activists attempting to bring aid to Gaza, which is suffocating under an Israeli siege, raise questions as to why Egypt sides with the U.S. and Israel. In our final piece on American imperialism, Eric Ruder examines how Egypt went from being the center of Arab nationalism to becoming a client state of Washington.

A series of articles in this issue deals with environmental questions. Phil Gasper in his regular column examines the climate talks in Copenhagen and asks whether capitalism has brought us past the point at which something meaningful can be done to avert climate catastrophe. Heather Rogers, author of the forthcoming Green Gone Wrong: How Our Economy is Undermining the Environmental Revolution, looks at the reasons why market-driven policies are incapable of offering a solution to our environmental woes. And finally, Amy Muldoon chews over the impact of capitalism on the food we eat, and the environmental and health impacts of the food capitalism pushes on us.

Also of note: Joe Allen interviews Dr. Alan Bean about the important but little known case of Curtis Flowers in Winona, Mississippi. Antonis Davanellos reports from Greece on the unfolding economic crisis that threatens to sink Europe’s recovery. Michael Ratner from the Center for Constitutional Rights describes the trip he took to Yad Vashem, Israel’s Holocaust Museum, after first participating in the Gaza Freedom March. Finally, Annie Zirin reviews a book about the Works Progress Administration of the Roosevelt New Deal era.

Revolt in the Middle East: Another world is possible