Moshé Machover is a mathematician, philosopher, and radical socialist activist, noted for his writings against Zionism. Born to a Jewish family in Tel Aviv, then part of the British Mandate of Palestine, Machover moved to Britain in 1968. He was a founder of Matzpen, the Israeli Socialist Organization, in 1962. He is author of numerous articles, including, with Akiva Orr, the groundbreaking 1969 analysis, “The Class Character of Israeli Society,” which was republished in ISR 23.

Middle East
Issue #80
ON SEPTEMBER 23, Mahmoud (Abu Mazen) Abbas, “president” of the Palestinian “Authority,” appeared before the United Nations general assembly and, to the great acclaim of the majority of delegates, made a bid for the...
Middle East
Issue #65
ON NOVEMBER 30, 2006, I had the great privilege of delivering the Barry Amiel and Norman Melburn trust annual lecture. The event took place at the Brunei Gallery Lecture Theater, in London University’s School of...
Middle East
Issue #88
AKIVA “AKI” Orr was a revolutionary activist and writer, founding member of the Israeli Socialist Organization (Matzpen), an enchanting raconteur, and a unique, larger-than-life character. His parents emigrated with him... 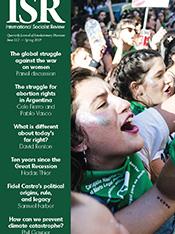