Skip to main content
US Politics and Society
By Lance Selfa
Issue #110: Editorials 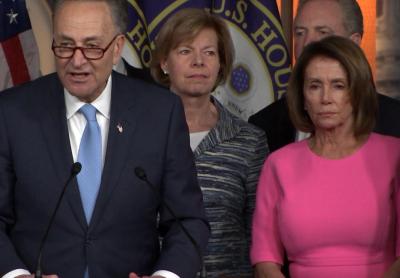 The images and sounds of children torn from their families and locked in cages in US “detention centers” captured the sadism that lies at the heart of the Trump administration. The source of this outrage—the anti-immigrant “zero tolerance” policy that forcibly separates immigrant parents from their children—quickly grabbed the national spotlight. Adam Serwer, senior editor for the normally staid Atlantic, drew this conclusion:

Americans should have fathomed the depth of the crisis Trump would cause in 2016, but many chose denial, ridiculing those who spoke the plain meaning of Trumpism as oversensitive. Since then, Trump has failed the people of Puerto Rico in the wake of Hurricane Maria; deliberately revoked the immigration status of hundreds of thousands of black and Latino immigrants; retreated from civil-rights enforcement; applied an immigration ban to a set of predominantly Muslim countries; attempted to turn black athletes into pariahs for protesting the unjust killings of their countrymen by the state; and defended the white nationalists who terrorized Charlottesville, Virginia. The separation of children from their families at the border in order to punish children for their parents’ decision to seek a better life America, as the forebears of millions of Americans once did, has now clarified for many what should have been obvious before.

People who would do this to children would do anything to anyone. Before this is over, they will be called to do worse.

Serwer’s article is a long response to the oft-heard liberal refrain that Trump’s policies are “un-American.” “This isn’t America,” they say. No doubt many people who feel revulsion at Trump consider him an aberration from the idealized picture of the United States as a country of “freedom and justice for all.” But it’s worth remembering that the United States was founded on slavery and the extermination of Indigenous people. Its history of alternating between brutal exploitation and xenophobic expulsion of immigrant labor is the result of what radical journalist Juan González described as the “harvest of empire.”

We don’t recount this history to place some sort of moral hex on the United States or its people, but to remind activists that the US government carried out most of what we now consider historical atrocities. Its institutions gave their approval. We should remember that, at one time, the Supreme Court upheld racial slavery, the internment of Japanese Americans, and Jim Crow segregation. Institutions like the Court, much less the “rule of law,” have proven themselves to be malleable in the hands of determined elites.

That’s why it came as little surprise to ISR that the Supreme Court last June upheld Trump’s Muslim ban, undermined public sector unionism with its right-to-work Janus decision, and even upheld the rights of religious bigots to discriminate against LGBTQ people. At the time of writing, the Trump administration looked set to place another conservative ideologue on the Court. The Court will have a solid majority to overturn legal abortion nationwide. Ironically, the United States stands on the precipice of criminalizing abortion, while women’s movements in Argentina and Ireland recently have made historic advances in the fight for abortion rights.

As with all of these policies, the majority of Americans oppose them. Yet because of the US’s eighteenth-century Electoral College, they are being imposed by a regime that lost the popular vote in 2016. Polls show three out of four Americans oppose Trump’s caging of children, and about two-thirds support the right to abortion. Trump himself has never managed to win the support of more than about four in ten Americans since he took office.

This is what a crisis of democracy looks like, and it has shocked millions into mobilizing to do something about it. Hundreds of thousands took to the streets in protest of Trump’s child kidnapping, repeating actions like the Women’s Marches that drew millions. Thousands know that something is deeply wrong in the United States, and they are open to alternatives. But for the vast majority of them, the November 2018 midterm election is their political horizon.

Virtually since Trump’s inauguration, political pundits and election handicappers have predicted a “blue wave” of Democratic victories in 2018. So far, evidence from state and federal elections since Trump’s entrance into the White House has reinforced that view. However, as the election draws closer and Trump tries to “pump up” his voting base, conventional wisdom has shifted, and predictions of a Democratic sweep have been dialed back. Nevertheless, the business press reports that business organizations are looking to hire Democrat-connected lobbyists, suggesting that they believe the Democrats will end up controlling at least one house of Congress.

If the Democrats do take over the House of Representatives (the most expected outcome of a strong Democratic showing), it won’t be because they really have much to offer. After all, these were same Democrats who, earlier in 2018, made a show of shutting down the government to force a vote to protect immigrant Dreamers, and then folded within a couple days with nothing to show for their action. This is a group that can’t muster a message—or even a solid vote—against Trump’s reactionary Supreme Court pick.

Most Democratic gains will be mainly due to the conclusion of millions that voting for Democrats will serve as a break on Trump. If the House ends up in Democratic hands, one can predict that their obsession with Russian meddling in the 2016 election will become their major “issue” for as long as they hold subpoena power. The problem is that while the Democrats chase down Trump-Putin links, they will ignore the very real and homegrown crisis of democracy unfolding all around them: cuts to social safety net programs; privatization of Social Security; gutting of unions; the opioid crisis; wage stagnation; a growing budget deficit fueled by tax cuts for the rich and corporations; environmental catastrophe; and attacks on voting rights, abortion, immigrants, and LGBTQ rights. The list can go on.

The victory in a New York House of Representatives Democratic primary of self-identified democratic socialist Alexandria Ocasio-Cortez over the incumbent Joseph Crowley, the number four person in the Democratic House leadership, shows that a platform that responds to the crises listed above is a winning platform. And yet most Democrats—and the Democratic Party as an institution—remain aloof from these concerns.

If Ocasio-Cortez makes it to Congress, Democrats will try all sorts of ways to co-opt or marginalize her. But that’s only a small problem for them. That’s because, at the time of writing (July 2018), Crowley is the only Democratic incumbent Congress member to lose a primary. The Democratic Party has largely succeeded in channeling anti-Trump energy behind a bank of candidates projecting the mushy social liberal “centrism” that passes for “progressive” politics today. Democratic leaders seem to be far more concerned with lecturing the Democratic base about treating its opponents with “civility” than with crafting a bold message of change.

A victory in November, then, will end up empowering many of the same politicians that have proven so ineffective in combating Trump. And they will bring with them the same incrementalist, market-friendly policies that have helped to underpin the decades-long assault on working-class living standards. Putting faith in the Democratic Party to fight the right means lending legitimacy to a party that is complicit in this assault. In the words of Hal Draper, “you can’t fight the victory of the rightmost forces by sacrificing your own independent strength to support elements just the next step away from them.”

With “institutions” helping to prop up Trump’s policies, and with the opposition party remaining only lukewarmly in opposition, a generation of activists is learning that it can only rely on itself. That is one of the lessons of the series of teachers’ strikes that swept “red states” in the spring of 2018. Through their own action from below, teachers won improvements for themselves and for public education that decades of the conventional electoral slog had lost. That potential exists among the millions (by some estimates, one in four Americans) who have attended a protest since Trump’s inauguration. It’s that invigoration of collective struggle from below—connecting with a growing interest in socialism—that will chart the future of left in the United States.