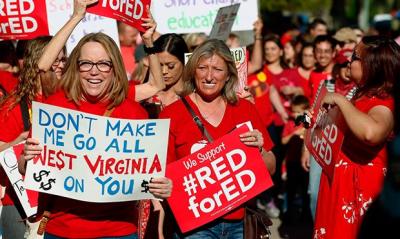 This issue of the ISR is not organized around a particular theme, but the articles are targeted at both current and long-standing important questions on the left and in society at large—from the significance of the wave of teachers’ strikes last spring and what it says about the potential power and creativity of working-class self-activity; the resurgence of efforts to bolster racism with pseudoscience; the prospects for a return of economic crisis; to what extent the left can “use” the Democratic Party (or be used by it); to the question of why the Israeli working class is different from other working classes.

Dana Blanchard, a socialist and former teacher who reported from the teachers’ strike in West Virginia, evaluates the “red state” teachers’ strike wave that swept from West Virginia to Arizona. “This strike wave has been truly groundbreaking,” writes Blanchard. “A rebellion in right-to-work states, in the heart of Trump country, that was built through rank-and-file organizing efforts and not from the leadership at the top is not one many of us, even those of us in the organized left of the labor movement, expected.”

In “More than a Ballot Line,” ISR contributor Bill Crane argues that any attempt by the left to run in Democratic primaries, whatever the intention, will lend illusions in the party and merely postpone the task of building a left that is independent from both parties of capitalism. For many socialists, “engaging in Democratic politics is frequently reduced to the question of whether or not the party’s electoral ballot line may be used as a platform to express socialist ideas. In this view, the left’s relationship to the Democrats becomes merely a tactical issue.” However, Crane insists, “the left’s relationship to the Democratic Party is an overarching political question whose answer not only decides the line of march for socialists in the United States, but has roots in the fundamental, historical division among socialists between social democracy and revolutionary Marxism.”

The world economy has experienced an extended period of growth since the Great Recession in 2007, but it has proceeded with underlying contradictions that portend future crisis. We are pleased to include in this issue contributions on the economy from a Marxist perspective in “Where Is Capitalism Headed?” with David McNally, Michael Roberts, Lee Sustar, Hadas Thier, and Lee Wengraf.

“In the era of Donald Trump,” writes ISR reviews editor Phil Gasper, “it is hardly a surprise that there has been a resurgence of so-called ‘scientific racism.’” Gasper proceeds to not only explain that resurgence (which arguably never completely went away), but also to show how these ideas were historically (and currently) used to bolster racist policies and practices, as well as the scientific invalidity of the idea of “race.” “Defeating the latest revival of scientific racism,” Gasper concludes, “will require not just good arguments but defeating the right-wing movements with which it is associated.”

In 1969, Israeli socialists Akiva Orr and Moshe Machover wrote an article, “The Class Character of Israeli Society,” which argued that the unique position of Jewish workers in Israel linked them to the Zionist project in such a way as to preclude the development among them of solidarity with oppressed Palestinians. Daphna Thier critically revisits this question, looking at the development of Israel since 1948, and draws similar conclusions that despite some significant changes in Israel’s economy, Zionism “has blunted the class struggle within Israel.”

Last issue we ran a detailed analysis of the crisis on Catalonia by Spanish socialist Josep Maria Antentas. To understand what is at stake, and what position socialists should take, we publish here the contribution of Eva María, a member of the International Socialist Organization, from the panel on “Quebéc, Scotland, and Catalonia: The Radical Left and the Struggle for National Self-Determination,” presented May 19, 2018 at the Historical Materialism conference held at Université du Québec in Montréal.

We are also pleased to include two interviews. In keeping with our coverage of the question of Appalachia, the working class, and the myths regarding the region, the ISR’s Eric Kerl interviews public historian and DSA member Elizabeth Catte, who is editing a volume of responses to the teachers’ strikes from West Virginia teachers.

Jeffrey Webber, in an interview with Phil Gasper, discusses the “Retreat of the Pink Tide in Latin America.” Webber discusses the shift from mass protest in the early 2000s in Latin America to the election of several leftof-center governments, which, during the commodities boom, were  able  to provide popular social spending programs without confronting the basic interests of the capitalist class. But with the onset of the crisis and the commodities price collapse, the degree to which these movements had been absorbed into the state became clear. “With the austere situation of state revenue, regimes had to decide which parts of the society would pay,” explains Webber. These governments transferred the cost of austerity onto their popular social base—workers, the poor, and Indigenous peoples.

Finally, we draw attention to a feature-length review by Pepjin Brandon, the author of War, Capital, and the Dutch State (1588–1795), of Paul Le Blanc’s October Song: Bolshevik Triumph, Communist Tragedy, 1917–1924. Brandon praises Le Blanc’s book as one that, “without ever ceding its position of sympathy for the Revolution and the people who made it,” asserts the right to vigorously critically analyze the revolutionary process.