Panos Petrou, a member of Workers Internationalist Left (DEA, by its initials in Greek) and part of the editorial board of DEA’s newspaper Workers’ Left, reports on the mass demonstrations shaking the conservative government. 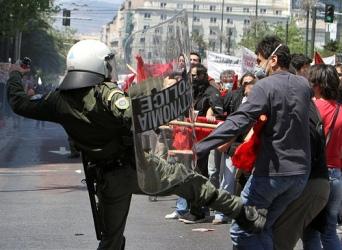 ON THE night of December 6, a special police squad in Athens murdered a 15-year-old student in cold blood in Exarchia, a neighborhood with a long tradition of activism among young people, the left and anarchists.

This was only the latest instance of police brutality against immigrants, and left-wing and anarchist activists—especially youth, in the wake of a major youth resistance movement against privatization of education that rattled the right-wing government of Prime Minister Kostas Karamanlis.

The next day, the Coalition of the Radical Left (SYRIZA), revolutionary left organizations and anarchist activists called a demonstration at police headquarters in Athens.

This was the first shock. Although the demonstration wasn’t well organized, and in spite of the climate of fear cultivated by the government and the big media, tens of thousands of people came out in the streets. At the same time, demonstrations were organized spontaneously in smaller cities around the country.

The police attacked the demonstration, using chemical sprays and tear gas. The demonstrators resisted by building barricades and bonfires all night long in the center of Athens.

However, the real earthquake happened the next day. On December 8, DEA members visited schools, proposing occupations and demonstrations. We found out that the idea was already on the minds of a majority of students. All schools in the country closed, and thousands of students poured into the streets.

The students occupied the centers of cities all over Greece, and in many cases, they besieged the police departments. The sizes of the protests were huge, especially in Athens, Thessaloniki and Patras. Hundreds of demonstrations took place in smaller towns, and even in villages.

It was already obvious within a matter of days that this would be a generalized explosion of youth after years of oppression, poverty and deep cuts in the government’s social spending.

That afternoon [December 8], SYRIZA called a dem­on­stration for the center of Athens. Despite the police presence and the use of tear gas, tens of thousands of people participated. The police again used violence to disperse the demonstrators.

What followed was a wild night of confrontations. More than 30 banks and many big stores and public buildings were set on fire. The same thing took place in other cities around the country.

In addition to students, the poor and immigrants came out to the demonstrations. The hatred of police repression and the country’s rich was everywhere.

The next day, Tuesday morning, dawned on a terrified government. Rumors circulated that Prime Minister Karamanlis intended to declare a state of emergency in Athens and Thessaloniki, which would mean a “temporary” suspension of all democratic and political freedoms.

Karamanlis called together the leaders of the political parties in successive meetings, demanding their consent for stopping the crisis with threats of brutal police intervention. It was obvious that pressure was being directed at the radical left coalition SYRIZA.

But the leadership of SYRIZA withstood it. The head of SYRIZA’s parliamentary group, Alekos Alavanos, came out of a meeting with Karamanlis and called on the workers and students to continue their struggle to topple the Karamanlis government. Alavanos also demanded a “real apology” to the youth—which would mean disarming the police, the end of all privatization measures in education and a policy to strengthen employment for young people.

Though pressed hard by the media, he made it clear that SYRIZA wasn’t participating in the riots, but he refused to condemn the “violence” of the demonstrators, insisting that the point was the fight against police violence.

One disappointing response was that of the Communist Party of Greece. After meeting with Karamanlis, the party’s secretary, Aleka Papariga, denounced SYRIZA and demanded that it stop pandering to the anarchists. The same line was taken by the leader of the right wing, Georgios Karatzaferis, who also targeted SYRIZA and accused it of being the “political wing” of the rioters.

The real problem, however, is the attitude taken by the large social democratic party, PASOK, led by Georgios Papandreou. In order to oppose Karamanlis’ center-right New Democracy party, Papandreou denounced the murder and police oppression. But at the same time, he denounced the demonstrations, proposing instead silent candlelight vigils to “mourn” the young student who was killed.

The murder of Alexandros Grigoropoulos came as the economic crisis reached a new level. Greece’s trade unions had already called for a 24-hour general strike on December 12. But the social democratic leadership of the Confederation of Greek Workers—terrified by the wave of demonstrations and complying with Karamanlis’ request—canceled a labor rally planned for that day.

The rally did take place after a mobilization by SYRIZA and organizations of the revolutionary left. It was massive, very militant and peaceful. Participation in the strike call was almost total. This broke through the climate of fear and scaremongering promoted by the government.

As this article is being written, the movement is continuing, and no one really knows what the future holds for Karamanlis.

The right-wing government is headed toward its downfall. Every opinion poll shows that it has already suffered a huge loss of support after the outbreak of big corruption scandals revolving around illegal sales of public land in collaboration with the church. The media in Greece think that Karamanlis won’t be prime minister by the summer of 2009.

To achieve unity, we need a left that is massive and effective, but also a left that is radical—that can inspire all the people now in struggle with the belief that this society, capitalism, should be overthrown, and that an alternative that meets our needs, socialism, is a feasible solution.

This is the potential presented clearly in front of us during the days of struggle that have shaken Greece.