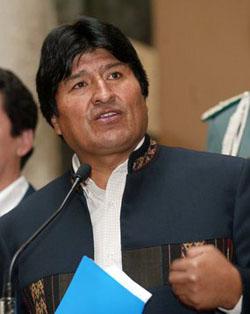 THE EXTRAORDINARY summit of the Union of South American Nations (UNASUR)1 held in Santiago, Chile, September 16, 2008, unanimously approved the Moneda Declaration (named after the presidential palace) concerning the ongoing conflict in Bolivia. The role of  Brazil’s president, Luiz Inácio Lula da Silva’s, was decisive in bringing UNASUR to agree to a “weighted balance” which, under the pretext of “putting a brake on the U.S.A,” will isolate the most “radical” positions.  In other words, those of [Venezuela’s Hugo] Chávez, which in fact generalized the crisis throughout the region and proposed to unambiguously condemn the Bush administration and extend solidarity with the government and the people of Bolivia. It is a much different position than the one adopted by Ecuadoran president Rafael Correa who immediately adopted Lula’s proposal.

In this sense, Brazilian diplomacy obtained an undeniable success. Not only did UNASUR emphatically come out in favor of maintaining the regional “order,” but it also took upon itself the role of new policeman. What almost no one mentions is that, behind the scenes, another actor has emerged a winner in the Moneda Declaration: the far-right Colombian regime, as the declaration allows for shutting down political space for “terrorist gangs.” The message is clear: like Evo Morales’s fight, that of “President Uribe against the FARC” favors “democratic institutions,” which require support from all the governments of the continent.

Deactivate the Bolivian “volcano”
The Moneda Declaration does not at all support the struggle for liberation, neither the Bolivian one nor that of the people in other countries on the continent. It does not take into account any of the political, social, economic, or historical demands of workers, indigenous people, and peasants.

The declaration proclaims “to give its full support for the constitutional government of President Morales, whose mandate has been ratified by a large majority during the recent referendum,” (point 1). However, it warns that “its respective governments vigorously reject any attempt of a civil coup and will not recognize any situation implying such coup attempt, or break in the institutional order, or likely to compromise the territorial integrity of the Republic of Bolivia,” (point 2). The declaration “expresses its firm condemnation of the massacre (September 10–11) that occurred in the district of Pando,” (point 5). But this declaration is followed by a “call to dialog” (between the government and the opposition) “in view of establishing the conditions to overcome the actual situation and to agree on finding a sustainable solution within the framework of full respect of the rule of law and of the legal force of order” (point 7). It goes even further since it proposes (or rather decides) to create a committee to “help the work of this dialog roundtable” and another one to “support and assist” Morales’s government (points 8 and 9).

In effect, in adopting the Moneda Declaration, UNASUR assumes a position of guardian of the regional “stability,” with the aim, in particular, of deactivating the Bolivian “volcano,” but also by guaranteeing the regional security of business for the transnational corporations as well as for local companies. If this is the new “South American integration”—so often praised by the supporters of “progress,” including some more left-wing sections—then workers, indigenous people, and peasants of South America confront a new danger. Because, in practice, far from working toward a process of integration of an anti-imperialist nature that would really jeopardize U.S. hegemony in the region, these governments are taking upon themselves the task of deactivating the political radicalization, demobilizing the working class, and promoting “agreements” and “productive pacts” with the local “national” propertied classes.

Moreover, UNASUR resolutions are, in practice, an unequivocal external mandate for “democratic intervention” (whose origin is to be found in the Democratic Charter of the Organization of the American States [OAS]). These resolutions had an immediate consequence in the form of the preliminary agreement negotiated on the September 16, 2008, between the [Bolivian] government and representatives of the National Democratic Council (CONALDE, which unites the oligarchs, the autonomous prefects, and groups of owners of land and of a large share of the economy). This preliminary agreement supposes, at the very least, a retreat on the part of the indigenist government, in three respects. First of all it will have to “accept that the districts recapture a part of the direct taxes on hydrocarbons that the government had decided to spend on the financing of the “dignity allowance” for retired people, and that is one of the main demands of the opposition. Second, it will have to invite as facilitators and UNASUR witnesses, the Catholic Church, the European Union, the OAS, and the United Nations. Finally, it will have to postpone for at least one month the call for a referendum on the constitution.2 In exchange, the government hopes to obtain “social peace.”

Is this a victory or a defeat for Morales? It depends on one’s point of view. “Compared to the day after the August referendum in which Evo won the approval of more than 67 percent, it is evidently a step backward. If we believe the reports, not unjustified, that a coup d’état was in the making, the government of Evo Morales succeeded in overcoming one of the most difficult challenges over the last thirty months, even if the future remains uncertain. In any case, the opposition succeeded in reducing to dust his striking victory in August, which should have started to solve the ‘strategic tie.’”3