Skip to main content
US Politics and Society
The Obama administration has disillusioned many of its progressive supporters in record time
By Phil Gasper
Issue #73: Critical Thinking 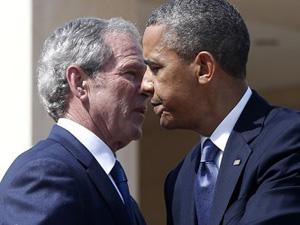 Less than two years after Barack Obama’s historic election victory in 2008, putting the Democrats in control of the executive and legislative branches of government for the first time in fourteen years, liberals are now bracing themselves for big losses at the polls in November in the next year. The GOP is now confident that it will take back the House and, at the very least, will greatly reduce the Democrats eighteen-vote majority in the Senate.

But despite the much trumpeted and much exaggerated rise of the Tea Party movement, the Democrats current political fortunes are not due to a significant shift in political consciousness to the right, but to their failure to live up to their campaign promises and the consequent disillusionment of many of their supporters.

The official unemployment rate is stuck at over 9 percent, with the figure at 16 or 17 percent once people who have given up looking for work or who are involuntarily working part time are included. The administration’s stimulus package at the beginning of 2009 helped stave off an even worse economic crisis, but was both too small and too heavily weighted toward tax cuts to significantly impact employment levels. Of course there were significant political obstacles from Republicans and conservative Democrats opposing a bigger stimulus, but instead of challenging these head on, Obama began by proposing a package at least one-third too small and then watched it get whittled down even further.

By contrast, there is a perception that the administration has gone out of its way to restore Wall Street’s profit levels (and outlandish bonuses) at vast public expense, while demanding almost nothing in return. The near meltdown of the banking industry and the subsequent government bailout offered an enormous opportunity to rein in the wealth and power of the financial sector, but the financial regulation bill finally passed in July was at best a missed opportunity. As journalist Matt Taibbi put it,

What it was, ultimately, was a cop-out, a Band-Aid on a severed artery. If it marks the end of anything at all, it represents the end of the best opportunity we had to do something real about the criminal hijacking of America’s financial-services industry. During the yearlong legislative battle that forged this bill, Congress took a long, hard look at the shape of the modern American economy—and then decided that it didn’t have the stones to wipe out our country’s one dependably thriving profit center: theft.

Meanwhile, to add insult to injury, leading administration figures have been too eager to claim that the economic crisis is over. In early August, for instance, Treasury Secretary Timothy Geithner wrote an op-ed for the New York Times painting a rosy picture of the direction in which the economy is going, prompting regular Times columnist Paul Krugman (who has warned that the economy may be on the verge of a double-dip recession and a new depression) to respond on his blog,

I live in fairly rarefied circles (that’s not a boast, it’s an admission of inadequacy), and even so I know a number of people whose lives have become a living hell: men in their late 50s who fear they’ll never work again, small business owners who have lost everything. Does the administration really believe that it can convince these people that it’s all on the mend?

But it’s not just the economy. As Krugman noted in one of his columns, “Threatened filibusters didn’t force Mr. Obama to waffle on torture; to escalate in Afghanistan; to choose, with exquisitely bad timing, to loosen the rules on offshore drilling early this year.”

Even the promise to remove combat troops from Iraq has turned out to be a fraud. While troop levels are being reduced to 50,000, an anonymous administration official admitted that the troops that remained would continue to engage in combat missions. And in addition to the U.S. troops, a further 85,000 private military contractors—many of them nothing more than highly paid mercenaries—will also remain in Iraq. As conservative journalist Eric Margolis noted in the Toronto Sun,

Washington seems to be following the same control model set up in the 1920s by the British Empire to secure Mesopotamia’s oil. Namely: Install a puppet ruler, create a native army to protect him, leave some British troops and strong RAF units in desert bases ready to bomb any miscreants who disturbed the Pax Britannica—and keep cheap oil flowing.

Except in terms of rhetoric, it’s hard to find much of a difference between the foreign policies of Obama and Bush.

What explains the failure of the Democrats to live up to their campaign promises? According to one popular argument, it ultimately comes down to a failure of effective messaging. On this theory, Democrats have ultimately been unable to break the conservative stranglehold on the American public’s ideas and so have been forced to compromise their ideas in order to win elections and pass legislation. But with each compromise, the Republicans move even further to the right, skewing the political spectrum even more, and leaving progressives who had put their hope in the Democrats disillusioned and frustrated.

A version of this argument is popular in the mainstream media, which portrays the United States as fundamentally a “center-right” country, in which the population is largely suspicious of activist government and liberal policies. But many on the left also accept the argument, including the Berkeley linguist George Lakoff, who has developed perhaps its most sophisticated variant, elaborated in a recent article on the left-wing Truthout Web site.

Lakoff points out that everyone’s thinking is governed by cognitive structures (a fancy way of talking about systems of ideas) called “frames.” Frames, according to Lakoff, “are physical, embodied in neural circuitry. Frames come in systems. Their circuitry is strengthened and often made permanent through use…Effective frames are not isolated. They build on and extend other frames already established.”

Lakoff argues that in areas like morality, religion, and politics, it’s common for people to have more than one frame. The frames are inconsistent with each other, and people often shift from one to the other. In politics, the goal is to get people to think in terms of your preferred frame and to inhibit the use of alternative frames. The trick is to reinforce “higher-level” frames, which are more general. “The stronger high-level frames are, the more effective frames that fit them will be. And the less effective frames that contradict them will be.” In politics the relevant high-level frames are “moral systems that define what is ‘right’ for a conservative or a progressive.”

The crucial point of Lakoff’s argument is that conservatives have developed an elaborate system for activating their preferred frames, including think tanks, training institutes, regular gatherings around specific issues, booking agencies for conservative speakers, and, of course, “conservative media going on 24/7/365.” The upshot is that

By contrast, according to Lakoff, Democrats do not have such a well-developed system in place and, just as bad, “they tend to view messaging as short term and issue based, rather than long term and morally based.” As a result, “Democrats [are] at a messaging disadvantage relative to conservatives, which leads to conservative victories.” Lakoff argues that Democrats then retreat on a particular issue, move to the right, and adopt conservative language. But this language strengthens high-level conservative frames, shifting the electorate even further to the right.

So Lakoff’s recommendation is simple—Democrats need to develop better ways of getting out their message that focus not only on immediate issues but also on long-term, high-level frames, and they need to develop an effective communication system just like the right.

I have two big problems with Lakoff’s analysis. First, it simply isn’t true that most people’s ideas in the United States are generally right wing. Despite the fact that conservative ideas tend to dominate the mainstream media, Lakoff ignores how people’s ideas are not simply formed by the language in which they are framed, but also by their experience of the real world around them. It doesn’t matter what stories conservatives tell about the magic of the market or how the rich deserve their wealth because they work so hard if this doesn’t match the realities that people encounter in their daily lives. That is precisely why popular consciousness has moved to the left in recent years, as free market policies have been revealed as a disaster for working people. Similarly, all the clever framing in the world has been unable to maintain support for the wars in Iraq and Afghanistan.

In fact, on issue after issue, the Obama administration has been more conservative than public opinion. For instance, polls show a majority in favor of the government taking a more active role in creating jobs, and in favor of rapid withdrawals from Iraq and Afghanistan. Polls also showed a clear majority of the U.S. population in favor of a “public option” in any health care reform legislation, an alternative that Obama quickly abandoned.

My second problem with Lakoff’s views is that, for all the discussion of neural circuitry and communication systems, they are based on an essentially idealist view of politics. By this I mean that Lakoff sees politics as a battle of ideas, with the ideas that are presented in the most compelling way winning out. Because Democrats don’t present their ideas in the most compelling way, they lose.

What this picture leaves out is the social role of the Democratic Party and the interests that it ultimately serves. Politics is not a pure battle of ideas. It is a struggle between different social classes to defend and advance their interests and to determine who will control how society is run. While the Democrats have historically represented themselves as the party of working people and oppressed minorities, in reality they are tied to protecting the interests of corporate America and the capitalist system just as much as the Republicans are, despite their differences in ideology. It is this and not primarily a failure to craft the right message that explains the broken promises.

There is also one other crucial factor that Lakoff and others like him ignore. While consciousness has moved to the left in the United States, that has not yet cohered into a political movement that can mobilize large numbers of people to fight for a progressive agenda. In the absence of such a movement, there is no pressure on the Democratic Party to enact reforms that will benefit working-class Americans rather than big business. When such movements exist, as in the 1930s and 1960s, politics can shift very rapidly to the left. It is no coincidence that it was during these decades that the most important gains were made by workers, the poor, racial minorities, and other oppressed groups.

For those who are angry at the Democrats’ for their broken promises, the solution is not offering better ways of packaging the party’s message, but building an independent movement on the ground that can fight both for immediate reforms and pose the vision of a different kind of society in the future.