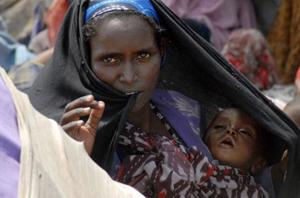 THE EAST African nation of Somalia is the site of an unfolding humanitarian nightmare—a massive famine that has cost tens of thousands of Somali lives in the past few months, according to the United Nations. Over 3 million people are affected right now, with more than 10 million at risk across the Horn of Africa.

According to the BBC, roughly 640,000 children are acutely malnourished in Somalia, and at least six in every 10,000 children die each day. Antonio Guterres, head of the UN refugee agency, declared in July that Somalia was the “worst humanitarian disaster’’ on the globe. The UN officially designated the crisis a famine, the first time it has adopted that designation since 1984.

Thousands of Somalis have poured into refugee camps in Kenya and Ethiopia. The population of the largest refugee camp in Kenya, Dadaab, is growing by more than 1,300 a day—it could reach as high as half a million. According to the BBC, “Parts of the capital, where there are camps for displaced people, were last week among three areas newly declared by the United Nations to be suffering famine.”

The UN also says that more than 4 million Kenyans are threatened by starvation. On August 4, the UN’s Food Security and Nutrition Analysis Unit said that famine was “likely to persist until at least December 2011.”

U.S. officials have laid responsibility for the mass starvation at the feet of the al-Shabab rebels who control southern Somalia, including south central Somalia and the Lower Juba region, where the famine is at its worst. Al-Shabab—which has been battling Somalia’s U.S.-backed Transitional Federal Government for the past four years—has been labeled a terrorist organization and a wing of al-Qaeda by the United States.

Washington claims the group is responsible for exacerbating drought conditions by blocking aid routes into the most affected areas. The rebels reversed an earlier decision to lift a ban on some international agencies, prompting Secretary of State Hillary Clinton to claim on August 4 that al-Shabab was “preventing assistance to the most vulnerable populations in Somalia.”

But there is much more to this story. Blame for the crisis in Somalia lies squarely with the United States. Somalia is suffering from a severe drought that has created much scarcity and hardship—but decades of Western intervention lie at the heart of this crisis.

Skimpy aid, well-funded war
To start with, aid officials have cited a lack of resources—not al-Shabab—as the chief obstacle to reaching famine victims. “The limits on our action are more on the side of logistics than access,” said Anna Schaaf, spokeswoman for the International Committee of the Red Cross. Both UNICEF and the Red Cross have listed problems of food purchases and flight scheduling as their main concerns.

“The lack of food stockpiling in Somalia reflects badly on the international humanitarian community,” Tony Burns, director of operations for SAACID, the oldest NGO in Somalia, told Britain’s Guardian.

Al-Shabab may be blocking some escape routes for refugees in the south, but, Burns continued, the rebels “are not monolithic” and may be willing to negotiate. “They are hard core in some places, and very moderate in others. In areas where they are not so strong, it is more [the] clans that make the rules,” Burns said.

Plus, according to the New York Times: “Also hampering the emergency efforts, aid officials contend, are American government rules that prohibit material support to the militants, who often demand ‘taxes’ for allowing aid deliveries to pass through.”

Finally, global food prices—fueled by speculation and the drive for profit—began to soar again in 2010 after a decline from their 2008 peak. Cereal prices in Somalia were 240 percent higher in May over the previous year, further exacerbating the dangers posed by drought.

The UN has requested $1.6 billion to address the crisis, but has received only about half that amount. Britain’s Secretary of State for International Development Andrew Mitchell has sharply criticized the response to the crisis by developed countries as “derisory and dangerously inadequate.”

The United States has pledged a pitiful $28 million in response to the UN request. Hillary Clinton claimed that the United States has already given over $431 million in food and nonfood emergency assistance to Somalia this year alone. Yet a hefty portion of what the United States allocates for Somalia comes in the form of military assistance, both for the Somali government and the 9,000-strong African Union Mission in Somalia (AMISOM) force, composed mainly of troops from Uganda and Burundi. AMISOM’s presence has fueled a civil war that has terrorized millions of ordinary Somalis.

Direct military involvement in counterterrorism is also a major element of U.S. foreign policy in the region, a role that is only intensifying with a widening drone war and other activities. Left-wing journalist Jeremy Scahill, in a recent visit to Somalia, uncovered a CIA base near Mogadishu airport where victims of renditions from Kenya and Ethiopia are interrogated. The base is also involved in clandestine military strikes. U.S. agents “are here full-time,” a senior Somali intelligence official told Scahill.

As Black Agenda Report points out, the U.S. escalation of the military conflict is directly tied to the famine: “The U.S. has armed an array of militias operating near the Ethiopian and Kenyan borders, making normal agricultural pursuits all but impossible, and the current world-class catastrophe inevitable.”

President Barack Obama has been clear on the strategic risks presented by instability in the Horn of Africa, and the importance of the AFRICOM military command in battling these alleged threats. During his 2009 visit to Ghana, he declared:

When there is genocide in Darfur or terrorists in Somalia, these are not simply African problems, they are global security challenges, and they demand a global response...And let me be clear: our Africa Command is focused not on establishing a foothold on the continent, but on confronting these common challenges to advance the security of America, Africa and the world.

AFRICOM was created under George Bush in 2007. Its budget for the coming year is close to $300 million, an increase of about $20 million over last year. Somalia is a critical component of AFRICOM’s presence. The Obama administration announced in July that it was sending Marines to train African “peacekeepers” there, and earmarking more than $75 million for Somalia counterterrorism assistance alone.

A long record of intervention
Western responsibility for the current crisis goes deeper—reaching back decades into the past.

Global austerity and privatization—driven by World Bank and International Monetary Fund (IMF)—wreaked havoc across the Third World in the era of “structural adjustment” begun in the 1970s. Somalia was food self-sufficient until the late 1970s, despite drought conditions—but global financial policy forced down wages and hiked costs for farmers, helping to pave the way for the civil war the broke out in 1988.

The United States, meanwhile, had long viewed the Horn of Africa as a strategic location, with its proximity to major trade routes through the Suez Canal, and access to the Middle East and South Asia. Global military competition between the United States and USSR played out through Cold War-era proxy battles between the region’s powers.

Militarization, structural adjustment, and the late 1980s civil war produced a horrible famine that by 1991 had taken 300,000 lives. The United States claimed the famine as justification for military intervention and sent in troops in 1992, under the auspices of the UN—although the most severe period of the famine had passed several months before, and the death rate had fallen by 90 percent. U.S. officials estimated that its forces inflicted 6,000 to 10,000 casualties—two-thirds of them women and children—in the summer of 1993 alone.

Intervention dramatically worsened conditions in Somalia, with the nation since then consistently ranking near or at the bottom of nearly all human development measurements, from life expectancy to infant mortality. Since 1991, the country has been wracked by civil wars, fueled by U.S. support for various sides in the conflicts.

In 2006, neighboring Ethiopia invaded Somalia to unseat the Islamic Courts Union (ICU), which had held power for barely a few months, but managed to bring some small degree of stability to the country. U.S. backing, training, and funding for Ethiopia’s overthrow of the ICU was a barely concealed secret—as was Washington’s support for installing the Transitional Federal Government in place of the ICU.

When Ethiopia pulled out in early 2009, it left an escalated civil war and refugee crisis in its wake: Approximately 10,000 people were killed, and 1.1 million Somalis were turned into refugees.

Human Rights Watch published a report in December 2008, on the eve of Ethiopia’s withdrawal, foretelling the current crisis: more than 3.25 million Somalis—over 40 percent of the population of south-central Somalia—in urgent need of humanitarian assistance. As Alex Thurston of Sahel blog described: “The fall and fragmentation of the ICU, combined with the brutality of the Ethiopian occupation, facilitated the rise of al Shabab, the ICU’s military wing.”

With U.S. Marines moving into position and stepped-up funding for military and counter-terrorism activities, the danger of U.S. intervention in Somalia has returned for the near future, with the current famine—just as in 1992—potentially providing cover for escalating involvement. On August 6, al-Shabab pulled out of the rebel-controlled sections of the capital of Mogadishu—at its height, the organization controlled about a third of the city. But whether the government can continue to hold onto the city is an open question.

As Scahill described the situation in the Nation:

In the battle against the Shabab, the United States does not, in fact, appear to have cast its lot with the Somali government. The emerging U.S. strategy on Somalia—borne out in stated policy, expanded covert presence and funding plans—is two-pronged: On the one hand, the CIA is training, paying and at times directing Somali intelligence agents who are not firmly under the control of the Somali government, while JSOC [Joint Special Operations Command] conducts unilateral strikes without the prior knowledge of the government; on the other, the Pentagon is increasing its support for and arming of the counterterrorism operations of non-Somali African military forces.

Meanwhile, Ugandan President Yoweri Museveni, a firm U.S. ally, has called for a no-fly zone to be established over southern Somalia. In Washington, Republican Representative Peter King is helping to fuel the push for intervention by raising the specter of terrorism in the United States—through al-Shabab recruiting Somali-Americans.

For the many of us who want to see an end to war and hunger in Somalia, United Nations peacekeepers are no solution. UN troops follow the dictates of U.S. priorities, just as they did during the “humanitarian intervention” of 1993.

The United States is concerned, above all, with ensuring its dominance over a strategically critical region. A devastating famine and thousands of deaths is no small price for them to pay to secure this goal. Antiwar and social justice activists must raise their voices urgently: Ending the country’s misery means U.S. hands off of Somalia now.