Skip to main content
US Politics and Society
The job of police, regardless of conviction or character, is to protect the 1 percent
By Sherry Wolf
Issue #81: Features 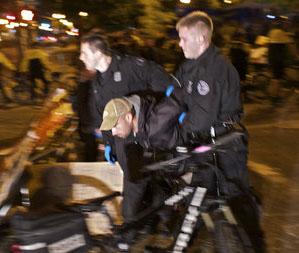 THE OTHER night, a father walking with his daughter of about five years old pointed to a policeman and said: “That’s a cop, sweetheart, stay away from them. They have big sticks and pepper spray that can hurt you, they are bad men.” RIP Officer Friendly.

I overheard this exchange en route to Brooklyn’s main transit hub, Atlantic Terminal, to see my own dad, who earlier in the day had e-mailed me the video of cops pepper-spraying peaceful student protesters at the University of California, Davis. The fact that my 72-year-old white father and my partner’s 11-year-old Black daughter sent me the same link is telling about our new Occupy era.

American police forces, militarized to the hilt and more repressive domestically than in decades, are exposing to all—especially downwardly mobile white Americans—what many in the world have known for years: The US will act as a police state to defend power and profit at the expense of any expression of democracy.

The Sunday New York Times even ran an op-ed from the former poet laureate, Robert Hass, who was clubbed along with his wife at Occupy Berkeley last week. The next day, students carried signs reading, “Beat Poets, not beat poets.”

Most Black and Brown Americans have developed at least a healthy skepticism of the police, if not outright hostility, which comes from any number of quotidian nasty and humiliating encounters with the cops. This has not been the experience of most middle-class whites in the United States, though poorer whites, too, have often been victimized by the police. Here are the incarceration stats:

Of the 2.3 million inmates in custody, 2.1 million were men and 208,300 were women. Black males represented the largest percentage (35.4 percent) of inmates held in custody, followed by white males (32.9 percent) and Hispanic males (17.9 percent).

The fact is, the American state hasn’t needed to use this type of daily force and brutality in the recent past. In times of relative economic stability, or at least perceived stability, the state does not need to crack 20-year-old students over the head—or aging poets for that matter. But these are not ordinary times, and the days of economic stability are past.

Some weeks ago, when I joined hundreds in the middle of the night to defend Occupy Wall Street from police eviction, the terror meted out by riot cops in every direction was stunning, even to a movement vet like me. The overwhelming numbers of cops and their wanton use of violence from coast to coast is the US ruling class’ way of warning us: this is what will happen if you continue to challenge our priorities.

With ideological cracks developing in the face of massive austerity alongside vast concentrations of wealth, how else can the 1 percent defend their interests against 99 percent?

In ordinary times, the 1 percent rely on ideology to pacify us; brute force is not usually necessary. But in the end, survival of this colossal inequality requires a gobsmacking display of force by their 800,000 police troops nationally, paid a median salary of $51,020, plus benefits, compared to a national household median income of 41,900.

For weeks now, like thousands of others, I have found myself in street battles against police who suddenly and without provocation impose crackdowns on all expressions of free speech. Police simply shut down Mayor Michael Bloomberg’s whole block on the Upper East Side on  November 20 to stop a drum circle from disrupting his dinner, creating a “no First Amendment zone,” according to civil rights attorney Norman Siegel.

What strikes me is how even in the face of out-and-out state repression, many activists—not all—still insist that the cops are part of the 99 percent. In fact, as cops pepper-sprayed and used their truncheons with wild abandon the night of the eviction, many people at first chanted at them: “You are the 99 percent, too.”

I disagree. Whatever class they emerge from, once they put on that uniform, police MUST, regardless of personal conviction, act in the interests of the 1 percent. That is their job.

Are they all sadistic pigs, like Lt. John Pike, captured on video casually and purposefully pepper-spraying UC Davis students in the face? No, not likely. Some enter the force to help their neighborhoods and even bring diversity to the force in the hopes that it will change police behavior and minorities’ perception of them. Instead, they are changed by becoming cops.

Intentions and personal character are not what are called upon when a superior officer demands cops suit up and crack heads. If police do not perform their job as commanded, their peers will not trust them, they will not back them up in violent situations, and they risk getting sacked. These are facts every cop understands all too well.

Think about this: what are most laws? They are tools for protecting private property. So we have laws against stealing food, but none against starving. We have laws to protect homes from burglary, but none against homelessness. The police exist to enforce these laws; they are a goon squad for those with property to defend, the 1 percent.

Police are set apart from the working class in salary, benefits and perks; they often live in cop-dense neighborhoods and drink in cop bars. They are encouraged to think of the civilian population with suspicion; racial profiling is taught, even to Black cops—how else can we explain the extraordinary imbalance of who gets stopped and frisked and who does not. In New York City, around 86 percent of those stopped for no reason other than living in a high-crime area are Black or Brown.

When cops don’t conform to cop-think, they can be punished and shunned among their kind until they either get in line or resign.

Our Occupy movement has accomplished many things so far, especially winning the idea that we can resist inequality and win some gains. Now we must learn a new lesson to advance our struggle, because if we’re unclear about who is on our side and who is against us, we can make decisions that are dangerous and naïve. We’ve come too far to be fooled.

Cops are theirs, not ours.

Originally published on Sherry Talks Back on November 21, 2011.