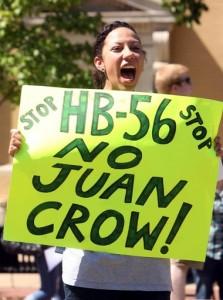 ALABAMA HAS declared war on immigrants with one of the most brutal anti-immigrant laws in the nation. But even as the law terrorizes some immigrant families into fleeing the state, it is also provoking resistance.

Earlier this year, state lawmakers passed the “Beason-Hammon Alabama Taxpayer and Citizen Protection Act,” also known as HB 56—a draconian package of anti-immigrant measures that make it a crime for the undocumented to work, travel, or own or rent a home.

Large parts of the law were upheld by a federal judge and went into effect in late September—including provisions that allow police to stop and detain people suspected of being in the country illegally and make it a felony for “an alien not lawfully present in the United States” to apply for a license plate, driver’s license or business license. The law also denies immigrants state medical aid and makes it a crime for individuals or employers to hire, harbor, rent property to, or even give a ride to an undocumented immigrant.

The consequences have been severe. As the New York Times recently noted, “Fear is causing an exodus as Latinos abandon homes and jobs and crops in the fields. Utilities are preparing to shut off water, power and heat to customers who cannot show the right papers.”

Despite the terrorizing effects of the law, Alabama’s immigrant community and their allies around the country are standing up to the attack.

On October 12, immigrants across Alabama participated in a “Day Without an Immigrant,” modeled on the historic mass protests in 2006. Students organized walkouts, thousands of people rallied, and workers organized wildcat strikes that shut down forty businesses—including 50 percent of Alabama’s $2.7 billion-a-year poultry processing industry.

Then, on November 13, in an inspiring show of bravery, thirteen undocumented activists—nine students and four adults—were arrested in Montgomery after sitting down to block an intersection between the Alabama State House and Capitol building. The action followed a march and rally by over 100 immigrants and their supporters chanting, “No papers, no fear, immigrants are marching here,” organized by the National Immigrant Youth Alliance.

One of those arrested was veteran Chicago labor and immigrant rights activist Martin Unzueta. Both of Unzueta’s daughters are members of the Immigrant Youth Justice League. In an open letter, he explained why he joined the civil disobedience action in Montgomery:

Today, the situation of immigrant communities is getting tougher and tougher. Today, the Obama administration is deporting 1,100 people a day. Ninety percent of these people are victims of the program “Secure Communities,” which criminalizes those who are in the wrong place at the wrong time.

I am risking deportation because I’m tired of seeing the suffering of our children, tired of the lies of Immigration and Customs Enforcement (ICE). They are not chasing criminals, they are persecuting us: the workers. We are immigrants, just like the ones who formed this country. Neither our children nor us deserve this kind of treatment.

The Department of Homeland Security and ICE lie because they are hurting our communities with their actions. We do civil disobedience because we are not afraid of those who lie. In Alabama, HB 56 has created a terrible situation for our community, and we want to change that situation. Long live the DREAM Act and those who will make it possible: the “Dreamers.”

Risking deportation
By participating in civil disobedience, the “Alabama 13” were risking deportation. But all thirteen were released following a solidarity campaign. They walked out of the Montgomery Police Department, chanting, “Undocumented and unafraid.”

On November 20, an overflow crowd of more than 2,200 attended a rally at the 16th Street Baptist Church in Birmingham. The church became a symbol of the struggle to end Jim Crow segregation in Alabama when it was bombed in September 1963 and four African American girls were killed. Now, immigrant rights activists are protesting against what many are calling “Juan Crow” policies.

The multiracial crowd chanted, “Who is Alabama? We are Alabama” in English and Spanish. Ten members of Congress who oppose HB 56, including Reps. Luis Gutiérrez (D-Ill.) and Terri Sewell (D-Ala.) were among the speakers at the rally. Many speakers drew the connection between the struggle to end segregation in Alabama during the 1960s and the immigrants’ struggle today.

A November 13 New York Times editorial describes not only how reactionary the new law is, but also the resistance it is sparking:

Alabama’s ruling class has dug in against the storm it caused with the nation’s most oppressive immigration law. Some of the law’s provisions have been blocked in federal court; others won’t take effect until next year. But many Alabamans aren’t waiting for things to get worse or for the uncertain possibility of judicial relief or legislative retreat. They are moving to protect themselves, and summoning the tactics of a civil rights struggle now half a century old.

Fearing arrest and deportation, immigrant workers have stayed away from farms and factories and kept their children out of school. The law has provoked a backlash from Alabama farmers and other business owners whose operations have been hindered without their workforce.

Following passage of HB 56 in June, the Obama administration filed a challenge through a US Justice Department lawsuit, arguing that immigration enforcement is the sole responsibility of the federal government. Civil rights organizations also filed legal challenges to the bill’s open encouragement of racial profiling. The legal challenges held up implementation of the law for four months.

Many expected the law would be blocked entirely or long delayed from taking effect, in keeping with the past year and a half, in which right-wing efforts to push through comprehensive anti-immigrant legislation had been stymied through a combination of protests, lawsuits and federal legislation. Federal judges blocked key provisions of anti-immigrant laws in Arizona, Utah, Indiana and Georgia.

However, an Alabama-based federal judge, Sharon Blackburn, ruled that HB 56 only aimed to enforce laws that Congress has already authorized and upheld most of the law’s provisions.

According to the Times, the sections Blackburn upheld include: “one that nullifies any contracts entered into by an illegal immigrant; another that forbids any transaction between an illegal immigrant and any division of the state, a proscription that has already led to the denial of a Montgomery man’s application for water and sewage service; and, most controversially, the section that requires elementary and secondary schools to determine the immigration status of incoming students.”

The law would hinder schools from fulfilling the vital task of educating our youth and require them instead to verify the immigration status of children in attendance, as well as their parents, and report the information to state authorities. The law also criminalizes basic, daily interactions between U.S. citizens and other lawfully present individuals and undocumented immigrants.

Racially motivated
Alabama’s Republican governor Robert Bentley emphasized his eagerness to enforce the legislation. Following Blackburn’s ruling, he boasted, “With those parts that were upheld, we have the strongest immigration law in the country.”

Bentley and other supporters of the law say it isn’t racially motivated. Bentley even claimed in an NBC interview that Alabama was forced to comply with federal civil rights laws in the 1960s, but that now, it was Alabama that was trying to force the federal government to enforce existing laws.

But racism is at the heart of HB 56. A central sponsor of the legislation, state senator Scott Beason, was secretly taped by the FBI describing African Americans in Alabama as “aborigines.” Beason also urged Alabama politicians to “empty the clip” to stop undocumented immigrants.

An AFL-CIO-sponsored delegation of union leaders recently visited Birmingham to discuss the law’s effects with community leaders and undocumented workers. Fred Redmond, international vice president of the United Steelworkers Union (USW) and a member of the AFL-CIO executive council, said:

The Obama administration regularly criticizes Alabama and other states for attempting to implement immigration policies. However, at a quickly organized solidarity press conference for Martin Unzueta in Chicago, attended by more than sixty supporters, activists pointed out the hypocrisy of an administration that has deported 400,000 undocumented immigrants already this year—a rate of 1,100 a day.

The White House has driven deportation levels to an all-time high through the so-called “Secure Communities” program that increases collaboration between local law enforcement and Immigration Customs Enforcement (ICE).

Anti-immigrant forces see enforcement as a way to remove the undocumented through a policy of attrition by creating unbearable conditions. By increasing enforcement and deportations, the White House has only served to fuel right-wing confidence and legitimize their initiatives. Now, the favorable court ruling for Alabama’s law will encourage more states to press ahead with challenges to federal immigration authority.

Despite the tremendous repression and hardship faced by the undocumented, the mobilizations and protests in Alabama demonstrate their continued ability and willingness to organize and resist. The slogan “An injury to one is an injury to all” will be crucial in challenging immigrant-bashing legislation and pushing back on deportations—whether the attacks are coming from the White House or racists like Scott Beason.