Skip to main content
US Politics and Society
By Lance Selfa
Issue #85: Editorials 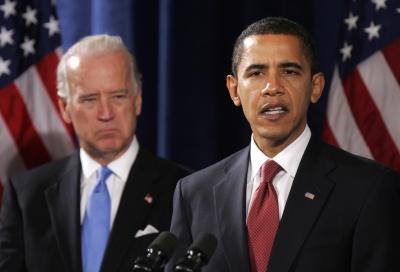 For months, the 2012 presidential election campaign had limped along, with President Obama neck-and-neck or maintaining a small lead over Republican presidential nominee Mitt Romney. All of that appeared to change August 11, when Romney named the right-wing ideologue, Wisconsin Rep. Paul Ryan, as his running mate. Suddenly, the election became about “big ideas” and the direction of the U.S. The Washington Post’s liberal pundit E.J. Dionne wrote:

Ryan’s budget ideas are indeed radical.  They revolve around cutting non-military government to levels not seen since 1950, downsizing Medicaid, and turning Medicare from a system of government-guaranteed health benefits into a voucher program where seniors would be left to fend for themselves in the health insurance market. And lurking behind these rotten proposals is a plan to privatize Social Security.  For these reasons and more, budget expert Robert Greenstein of the Center for Budget and Policy Priorities concluded that Ryan’s proposal “would have been outside the bounds of mainstream discussion due to its extreme nature.”

Liberal Democrats greeted the Ryan nomination with glee. In their minds, Ryan’s ideas are so toxic that they can’t help but drag down the entire Republican ticket.  They may be right, but they would be wrong to count on it.  For one thing, wealthy conservative and Republican donors will unleash a torrent of money that the Democrats are unlikely to match. Second, GOP-passed changes in state election law are designed to suppress the vote of Democratic constituency groups. But those are secondary considerations to the main reason why Obama could join the ranks of one-term failed presidents like Jimmy Carter and Herbert Hoover. That’s because Obama, the 2008 candidate of hope and change, is now the leader of an untenable status quo.  As Lance Selfa shows elsewhere in this issue, the Obama administration assumed the mantel of protector of the banksters and conservator—rather than the gravedigger—of George W. Bush’s foreign policy.

It should be obvious that if you foreclose on your voters, cut their pay, and legalize theft of their wealth by Wall Street oligarchs, they won’t be your voters anymore.  Somehow, Democratic activists continue to operate as if policy doesn’t matter to voters, or that policy evaluation is a Chinese [restaurant] menu of different stuff, some of which you like and some of which you don’t, as in “Oh I’ll take a pro-choice moderate, with a bailout, and gay rights.  And a Pepsi”.  But that’s not how it works – voters’ lives get better, or they don’t.  And under Obama, stuff has gotten worse.  Obama’s economic policies have made economic inequality sharper than it was under Bush, due to his bailout of banks and concurrent elimination of the main source of wealth of most Americans, home equity.  With these policy choices, Obama destroyed the Democratic Party and liberalism—under Obama’s first two years, the fastest growing demographic party label was “former Democrat.” Liberalism demands that people pay for a government, but why should anyone want to pay taxes for the terrible governance Obama has implemented?

It’s not that Obama and Romney are identical candidates—Tweedledee and Tweedledum. The Obama health care reform relies on expanding Medicaid to cover millions more of the uninsured. The Romney-Ryan program slashes and burns Medicaid, leaving as many as 27 million more Americans without health care coverage. Obama talks about (modestly) raising taxes on the rich. Romney and Ryan want to hand the richest Americans almost $5 trillion more in tax breaks. And so on. In other words, if measured by that narrow perspective, Obama and the Democrats are clearly the “lesser evil” in this election.

But these policy differences are contested within a bipartisan neoliberal consensus that is aiming to lower the standard living standards of American workers so that American business can compete more effectively in the global economy. A key part of that bipartisan consensus is the long-standing drive for “reform entitlement” (a.k.a. cutting Social Security and Medicare). Ryan’s entrance into the race shifted the terms of the debate even more in that direction, as both campaigns will be prodded to show how they would “reform entitlements.” If the national debate—such as it is—revolves around those questions, rather than the question of the acute crisis of inequality and joblessness, the champions of austerity will have won the day no matter which candidate wins in November.

Ryan’s budget set down a marker that will have the effect of pulling the entire political spectrum to the right. And everything we know about Barack Obama suggests that, if reelected, he will trail after Ryan in his illusory quest for a “bipartisan” solution. In his excellent article in the September Harper’s magazine, Thomas Frank captures this dynamic of the Obama years well:

Republicans have grasped that if the contest is not about issues but the relative position of the two parties, then they are free to move ever rightward, dragging the center with them, always keeping it a few inches away from the president’s anxious, conciliatory grasp.

And why not? Since what they say and demand today will probably be what he (or his centrist successor) says and demands tomorrow, the obvious choice is to keep escalating those demands and that rhetoric. And by insisting with such unanimity on the absurd charge of “socialism,” they have actually done a very canny thing: they have defined whatever Obama embraces—bank bailouts, kill lists, herding the public into the arms of private insurers—not as the Democratic mainstream, but as the outermost fringe of the party.

That’s the way the political system has already chosen the outcome, even if by some miracle Obama wins in a landslide. Behind all of the campaign rhetoric and ominous-sounding attack ads lies the reality that both parties plan to continue the austerity drive. Democratic politicians will present their proposals for cutting Social Security, Medicare, and other programs as sane and moderate by comparison to the “extreme” GOP. But the Democratic cuts are still cuts.

Earlier this year, Jeffrey Sachs, the onetime champion of neoliberalism-turned-sharp critic, compared Obama’s 2012 budget proposal with that of Ryan. Over a decade, Obama’s proposal would reduce primary federal spending (excluding interest payments on the debt) to 19.3 percent of U.S. gross domestic product, compared to around 17 percent of GDP under Ryan’s plan. As Sachs wrote:

The difference is modest, but the important fact is this. Both sides are committed to significant cuts in government programs relative to GDP. These cuts will be especially [harsh] in the discretionary programs for education; environmental protection; child nutrition; job re-training; transition to low-carbon energy; and infrastructure.

And while Obama and Democrats intend to skewer Romney and Ryan for their attacks on Medicare and Social Security, their emissaries are formulating a plan to do much the same if Obama is reelected. Throughout 2012, Obama administration officials and Democratic leaders have been meeting with Republican congressional leaders to produce an accord for Obama’s second term. Under the plan, reflecting the outlines of the 2011 presidentially appointed Simpson-Bowles commission, the GOP will agree to raise some taxes while the Democrats will agree to cut entitlement spending, according to the New Yorker’s Ryan Lizza. “All the paperwork’s done!” Obama senior adviser David Plouffe told Lizza. “We know what the options are. It’s all been done! It’s not like they’re starting from scratch.”

Given the obvious threat from Romney/Ryan, many will be tempted to vote for Obama as the “lesser evil.” Liberals and leftists who can always be counted on to support Democrats on election day are calling for a vote for Obama. In a widely publicized Alternet piece, left-wingers Carl Davidson and Bill Fletcher, Jr., founding members of 2008’s Progressives for Obama, went so far as to assert that “Obama’s record is really not what is at stake in this election.” Through a fog of pseudo-left jargon, they call for a vote for Obama as a defensive maneuver against a right bent on “white revanchism” and captured by “irrationalism.”

No doubt, Davidson and Fletcher would agree with much of the analysis of Obama presented here. But they believe that a vote for Obama will strike a blow against the right. In this regard, they agree with the liberal Dionne. Davidson and Fletcher will contribute to the pressure on progressives to spend the next few months trying to win a second term for the neoliberal Obama administration. Will this really help to push back the right? Our will it serve to give the left’s endorsement to the bipartisan consensus in which “lesser evils” end up carrying out the policies of the “greater evils”?

In his seminal 1967 essay, “Who Will Be the Lesser Evil in ’68?” the socialist Hal Draper addressed this point:

So besides Tweedledee-Tweedledums and besides the Lesser Evils who really are different in policy from the Greater Evils, we increasingly are getting this third type of case: the Lesser Evils who, as executors of the system, find themselves acting at every important juncture exactly like the Greater Evils, and sometimes worse. They are the product of the increasing convergence of liberalism and conservatism under conditions of bureaucratic capitalism. There never was an era when the policy of the Lesser Evil made less sense than now.

Draper had in mind the 1964 election. Then, the “peace” candidate Lyndon Johnson defeated the “warmonger” Barry Goldwater. Only months after being elected in a landslide, Johnson plunged the U.S. into the Vietnam disaster. Today, a similar dynamic is in play. If Obama defeats Romney, it will be on the strength of his appeal to protect and defend Social Security and Medicare—the same programs he plans to cut if reelected.

Those who want to build a political alternative shouldn’t settle for a less extreme version of austerity and neoliberalism. We need to build an alternative to the two-party system that challenges the priorities of the status quo and mobilizes the power of working people to pressure all of the politicians—no matter what happens in November.