Skip to main content
US Politics and Society
Issue #86: Editorials 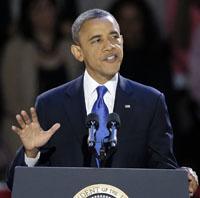 PRESIDENT BARACK Obama won a decisive, if narrow, reelection November 6, turning back a challenge from Republican Mitt Romney. Meanwhile, Democrats added to their ranks in the US Senate while the House of Representatives remained in Republican hands.

After an interminable presidential election campaign costing more than $6 billion and featuring 1.2 million (!) media ads, the basic lineup of the US government in Washington hardly changed. While the federal elections appeared to ratify the status quo ante, referendum results suggested a more liberal trend, with initiatives in support of same-sex marriage, legalization of marijuana, trade union political activity, state funding for abortion and immigrants’ access to higher education passing.

In contrast to 2008, when Obama’s elections set off jubilant multi-racial celebrations across the US, Obama supporters largely greeted the 2012 result with a sigh of relief. 2012’s electorate—which may turn out to be about 8-10 percent smaller than the 2008 electorate—wasn’t voting for “hope” and “change.” It was voting in fear: to prevent the right-wing ticket of Romney and Rep. Paul Ryan from further tearing up the social safety net to finance even more tax cuts for the rich.

Obama relied on an unprecedented mobilization of the Democratic Party “base” – African-Americans, Latinos, trade unionists, women, LGBT people and young adults. Betting correctly that they could leverage the changing demographics of the American electorate in their favor, the Democrats assembled what political analyst Ron Brownstein called “a coalition of the ascendant” to pummel the Republicans. Yet again, the Democratic base saved one of Corporate America’s two ruling parties.

The other major corporate party, the Republicans, emerged dazed and confused— although unvanquished—from the election. In the campaign’s last week, as polling and early voting data provided signs of the coming Democratic rout, conservative pundits and Republican operatives insisted that they had “feelings” that enthusiasm was on their side. Like millions of liberals in 2004 who couldn’t believe that George W. Bush could win, the right was convinced that the country shared its hatred of the first African-American president. The conservatives were wrong.

GOP apparatchik Karl Rove’s election night meltdown on the Fox network illustrated the cluelessness inside the conservative bubble. Rove forced host Megyn Kelly to interrogate Fox’s number crunchers on camera because he refused to believe the network’s declaration that Obama had won Ohio. Only days earlier, Rove was predicting an Electoral College landslide for Romney.

The GOP’s problems went deeper than the failures of its pundits to foresee its coming defeat. After all, this was the party that, in the year after Occupy Wall Street popularized the idea of the “1 percent” lording over the “99 percent,” nominated a bloodless corporate raider as its standard-bearer. Moreover, in its conscious appeals to older, wealthier whites who “want their country back,” it thought it could turn the clock back to the 1950s— before Medicaid and Medicare, when contraception and abortion were illegal, and when racial quotas on immigration still existed. The electorate of 2012 clearly rejected that.

Yet, the right’s gambit almost succeeded. While Obama will end up with about a 3 million vote advantage over Romney in the national popular vote, the result fell perilously close to the coin-flip it appeared in the campaign’s last month. On the eve of the election, Matt Stoller, a former Democratic Party activist turned radical critic of Obama, explained why on Salon.com:

The Republican base finds Romney uninspiring, and Romney has been unable to provide one good reason to choose him except that he is not the incumbent. Yet, Barack Obama is in a dog fight with this clown. Why? . . . The answer, if you look at the data, is that Barack Obama has been a terrible President and an enemy to progressives. Unemployment is high. American household income since the recovery started in 2009 has dropped 5%. Poverty has increased substantially. Home equity – the main store of wealth for the middle class – has dropped by $5-7 trillion, in contrast to the increase in financial asset values held by Obama’s friends and donors. And this was done explicitly through Obama’s policies.

The paradox of the 2012 election was this: the working-class groups whom the Great Recession has hammered the hardest were those whose votes reelected the man who had presided over this indefensible status quo. The Democrats successfully turned the election from the referendum on Obama that Romney sought into a “choice” between a two alternatives. They succeeded in painting the Romney/Ryan alternative as unacceptable.

To secure these votes, Obama made highly targeted appeals to segments of his coalition. To Latinos, he allowed undocumented youth to seek work permits. To women, he promised not to cut funds to Planned Parenthood. To autoworkers in the industrial Midwest, he touted his administration’s rescue of Chrysler and GM in 2009.

While it was certainly bracing to see Democrats using these issues to “wedge” Republicans into uncomfortable positions, we shouldn’t forget that most of these moves were defensive gestures that didn’t necessarily carry any promises of more far-reaching reforms. Nor should we forget that Obama’s Homeland Security department deported more immigrants than Bush’s did; that Democrats inserted restrictions on abortion into Obama’s health care reform act, or that the terms of the auto bailout cut wages and benefits and rationalized the industry with a string of plant closings.

But that’s the way it is with Obama and the Democrats. Whatever their election campaign rhetoric, they remain as committed to the ruling-class drive for austerity as are the Republicans. And once all of the election fanfare is over, Obama will return to his day job as chief servant of that 1 percent in the White House.

In an “off-the-record” interview with the Des Moines Register given during the last weeks of the campaign, Obama spoke of his plans for his second term. Did they involve a government jobs program? Raising the minimum wage? Re-establishing union rights for public-sector workers? How about challenging racism or reining in the violence of the US Border Patrol?

No. Obama said his top goal for the start of a second term is to strike a “grand bargain” with the Republicans to reduce the federal deficit by $4 trillion over 10 years, mainly through spending cuts, including in the government’s most popular programs, Social Security and Medicare.

It’s safe to say this wasn’t what the hundreds of thousands of core Democrats whose votes made the difference for Obama on Election Day had in mind when they cast their ballots.

The “grand bargain” envisions austerity on a vast scale, with the Democrats succeeding where Republican plans would have stirred up opposition. That’s a crucial lesson: In this case, the “lesser evil” will be more capable than the “greater evil” of actually accomplishing evil.

Given this bipartisan conspiracy against the interests of working people, it’s essential to ask where the alternative to a grim future of austerity, war and inequality lies. To answer that question, it’s necessary to look away from the multi-billion dollar electoral extravaganza to examples like the early 2011 Wisconsin uprising, last fall’s Occupy movement, or to this fall’s Chicago teachers’ strike.

Each of these in its way represented an attempt to provide some response from working people and their organizations to the bipartisan assault on their living standards.

As the election campaign heated up, national politics moved away from the “big picture” issues that motivated Wisconsin and Occupy and back to the small-bore conflicts over candidate gaffes and focus group-tested appeals to specific slivers of swing-state voters. Organizations like the trade unions and civil rights groups that could be mobilizing their memberships to press for more far-reaching change are absorbed into the multi-billion dollar election machinery as appendages to one of two parties of corporate America.

But now that the elections are over, and the uncertainty about their result is resolved, it’s time to reorganize our side to face the coming austerity onslaught. And when we do, the lessons of Wisconsin, Occupy and Chicago—both positive and negative—will count for far more than the 2012 election’s empty rhetoric.