Lee Sustar looks at the significance of the Chicago teachers' strike victory. 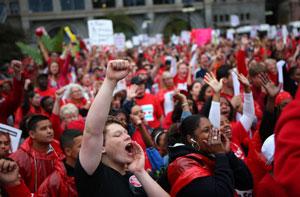 IT’S TIME to take stock of the significance of the Chicago teachers’ strike that beat back corporate education reform—not just for teachers and other public-sector workers, but the wider labor movement.

But before considering its impact on future fights, let’s take another moment to savor a labor victory in one of the most important union struggles in many years.

There was the unforgettable Day One, when tens of thousands of red-shirted members of the Chicago Teachers Union (CTU) and supporters swarmed downtown, shutting down traffic around the Board of Education headquarters and City Hall in what a local radio news reporter aptly called “an older and more polite version of Occupy Chicago.”

In truth, it wasn’t all that polite, either, if you happened to read the handmade placards and hear the chants directed at Mayor Rahm Emanuel, who began targeting Chicago teachers months before he took office.

Then Day Two—another day, another mass march. After picket duty at schools in every neighborhood of the city in the morning, teachers again swept downtown, this time turning stately Buckingham Fountain on the lakefront into the site of an open-air union rally that conjured the spirit of famous Chicago labor battles of the past.

The following day came the three big demonstrations at high schools on the South and West Sides, in neighborhoods populated predominately by African Americans and Latinos. The hot late-summer sun didn’t deter teachers or neighborhood residents who cheered them on.

And the excitement wasn’t limited to the big protests. Anyone who walked the picket lines at neighborhood schools experienced not just the impressive solidarity among teachers, but the groundswell of support for the CTU among parents and the wider community. Those wearing a red T-shirt from the CTU or the Chicago Teachers Solidarity Campaign were routinely stopped and thanked on the street, while getting friendly honks and waves from passing cars.

THE MORE support grew for the teachers, the more Rahm Emanuel unraveled.

The man known for his take-no-prisoners approach to politics did his best to whip up a parent backlash with hour-long press conferences during the opening days of the strike. It didn’t work. Sweaty and compulsively gulping from a plastic water bottle, Emanuel spewed insulting comments that seemed only to inspire more public support for the CTU.

When CTU delegates decided to prolong the strike into a second week in order to consider the tentative agreement, Emanuel finally thought he could seize the moment. Yet when he sought a court injunction to end the strike, a judge put a finger to the political winds and decided not to act until CTU delegates could meet and discuss the deal.

The details of the agreement show a clear victory for the CTU. Emanuel failed to impose merit pay—the practice of basing teachers’ wages on how well their students perform on standardized tests. The union also maintained “steps and lanes,” a pay structure that grants additional salary hikes based on years of experience and additional education. Those automatic pay increases will take some of the sting out of the modest gain in base pay—a 3 percent gain in the first year and 2 percent in each of the next two years.

These increases are counterbalanced by uncompensated additional days in a longer school year. The union, however, secure contract language that bars the city from rescinding raises, as it did in 2011, and teachers will see pay raises at time when many unionized workers in the public sector are seeing pay freezes or outright cuts. Moreover, Chicago Public Schools didn’t get the five-year contract it wanted, but had to swallow a  three-year deal instead—which means the agreement will expire just as Emanuel is running for re-election.

Another concession concerns what happens to teachers who are laid off—an important question for teachers in a school district that has slated so many schools for closure or “turnaround.” Laid-off teachers will remain in the displaced teachers’ pool with full pay for five months, instead of 10 in the old contract. That’s a bitter pill to swallow for teachers in schools targeted for closure.

The deal does, however, stipulate that half of new teachers hired must be displaced CTU members. It’s the first time CPS will be required hire such teachers since school “reform” was first implemented in 1995. Further, the CTU forced Emanuel to limit the use of test scores in teacher evaluations to the minimum 30 percent required under state law, rather than the more aggressive approach favored by the mayor. The union further blunted Emanuel’s effort for a fast-track termination process for teachers rated as “unsatisfactory.”

Then there’s the fine print of the contract that gives the CTU new leverage in key areas, including an anti-bullying provision to help members stand up to abusive principals. It will give union activists key tools to build effective union chapters.

To better grasp the significance of the Chicago teachers’ ability to hold the line, consider the fact that the CTU’s parent union, the American Federation of Teachers, has already conceded on the key issues of the strike and stood pat while public education is being rapidly privatized in New Orleans, Detroit, Cleveland and Philadelphia. In Baltimore, moreover, the AFT staff directly intervened to get teachers to ratify a teacher evaluation system that has left the majority of union members at risk of firing for poor performance. That’s why the CTU’s fight has become a rallying point teachers far beyond Chicago.

Further, the CTU also faced down Emanuel, perhaps the biggest bully in Democratic Party politics. As President Barack Obama’s chief of staff, Emanuel worked with Education Secretary Arne Duncan, who used to run CPS, to carry out the Race to the Top education program. That deal made $4.3 billion in federal grant money available only to states that would carry out education “reform”—including attacking teachers’ union protections and opening the door wider for charter schools.

In his 2011 mayoral campaign, Emanuel took regular aim at teachers. Once elected, he twisted arms in the Illinois legislature to push through a law that requires the CTU to get 75 percent of all members to vote to authorize a strike. Emanuel’s political allies boasted that there would never be another teachers’ strike in Chicago. But the CTU not only met the threshold, but surpassed it, with nearly 90 percent of teachers voting to authorize a strike.

Emanuel also tried to pit parents and students against the union. The CTU responded by tying its struggle to wider working class demands, which became a key factor in the CTU’s victory.

THE LESSONS of the Chicago teachers’ strike apply to the labor movement far beyond one city and one occupation. Here’s a list of some of the main ones:

The list of lessons of the CTU strike could go on and on. But for a labor movement starved of success for so long, that’s an excellent start.