The Greek revolutionary socialist organization, DEA (Internationalist Workers Left) held its national conference in Athens on October 26-27, 2013. This conference had a special character. It voted not only for a new central committee and the Political Resolution, but also for new rules and procedures.

The adoption of the new rules and procedures signals a differentiation of DEA from the organizational tradition inherited from the International Socialist Tendency. DEA can now move toward a more democratic model of discussion and functioning, while avoiding mistakes of other organizational models that can lead to paralysis and constant fracturing in the name of “democracy.”

The discussion of the new rules and procedures, and also the “organizational” discussion the second day of the Conference, evolved around an effort to reorganize our functioning. It was not just about the formal rules, but was also a rich discussion about the best way to organize day-to-day functioning, discussions, and interventions in a democratic, collective, and effective way.

The political discussion on the first day of the Conference evolved around DEA’s perspectives and goals, as well as its tactics in SYRIZA,1 in the antifascist struggle, and in the wider resistance movement. The essentials of this important debate are introduced in the Political Resolution that was approved by the Conference. That resolution is reprinted here. 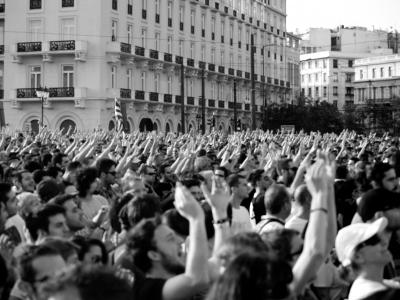 Political Resolution
The deepening and prolongation of the crisis of capitalism internationally, combines with the political crisis in Greece. This combination creates a situation of rapid socio-political polarization and the prospect of an important acceleration of the pace of the crisis.

The rulers cannot continue to rule in the same way they used to
The so-called “success story” of Prime Minister Samaras and Finance Minister Stournaras has already collapsed. The only “promise” the bourgeoisie can make is that of a long-term prolongation of harsh austerity, a long-term prolongation of unprecedented levels of unemployment, and no “light at the end of the tunnel.” Despite all the bloody sacrifices, the debt is skyrocketing to a level higher than that of 2009 (it will be 317 billion euros in the second quarter of 2013!), and this makes the prospect of new memorandums and new austerity measures more and more possible.

On the political field, New Democracy (ND) cannot address the vacuum of leadership that bourgeois politics is facing. Despite the scandalous support of all the forces of the establishment (mass media, big capitalists, international power-centers), its levels of influence remain low and it risks losing elections whenever they happen. The far-right turn of Samaras2—creating more problems than the ones he is solving—is now facing “opposition” even inside New Democracy. Thus, even notorious far-right politicians of ND like Dendias and Voridis, 3 are forced—despite their recent policy—to “tackle” Golden Dawn,4 in order for New Democracy to retain some control of the political developments and to keep alive their hopes of winning first place should elections be called.

The center-left, which traditionally had the task of organizing compromises and driving counter-reforms, look like zombies. With the anger of the social base it once represented directed against it, social democracy in Greece is crumbling at a pace that is unprecedented in Europe. In the polls, PASOK, under the leadership of Venizelos, is close to the threshold for parliamentary representation, while its various fragments are engaged in a futile attempt to “recompose,” and establish a Greek version of the Italian “Olive Tree.”5 Any force (for example the Democratic Left, DIMAR) that joins this swamp will instantly go through the “wood chipper” of crises and break-ups as a result of working-class and popular anger.

The reorganization of social democracy will be impossible, as long as a policy of elementary concessions and social dialogue is impossible for the ruling class.

This vacuum of leadership from the traditional bourgeois parties creates the danger of authoritarianism, an antidemocratic turn towards a “stronger state” that “rules with an iron fist.” The growth of Golden Dawn (with the scandalous support of the state apparatus) was and still is a warning for such a prospect. Facing this threat, our only shield is the force of the workers movement in Greece; the force that supported the rise of the Left (and mostly SYRIZA); the force that imposed the first blow to Golden Dawn after the murder of Pavlos Fyssas; the only force that can totally crush the neo-Nazis and defend democratic rights and freedoms.

The ruled don’t want to be ruled as they have been
Facing austerity policies, the working class and the people of Greece responded with a prolonged and strong resistance, at the top level all over Europe. During the last three years, many times the establishment estimated that it was finished with facing resistance. But every single time it soon had to face a revival of the resistance movement. This is the response to those who claim today that “people have lost the will to fight”—especially the trade-union leaders who blame the people for their own shortcomings or betrayals.

The trade-union leadership—especially the social democrats—bear historical responsibility. By accepting the Memorandum,6 by trying to rescue the trade-union apparatuses but not the workers’ rights, they have led the unions—during a time of mass workers struggle—to an historical crisis. This situation, combined with the delay in the development of alternative social organizations of struggle, results in the lack of a defensive weapon for the working class at a critical moment.

All of these factors combine to create a strange situation. On the one hand, the working class seems unable to strike back, to reverse immediately the Memorandum and the austerity policies. On the other hand, the people give unprecedented force to the Left; and they support a political solution (a left-wing government) that remains strong and popular despite the fact that all the “hammers” of the system are hitting them.

Whoever inside SYRIZA thinks about the repetition of such patterns, is thinking about totally utopian scenarios.

The left-wing government, in the midst of the deep crisis in Greece today, will be an adventure. Either it will be forced to betray almost immediately the workers’ popular anticipations and this will lead to its tragic or comic collapse, or it will be forced to apply policies that overturn crucial political choices of the ruling class, thus calling “on stage” the social movements, thus paving the way for radical changes that go way beyond a simple parliamentary conquest of governmental power.

DEA must prepare itself for these kinds of dilemmas and struggles. Our struggle is to overthrow Samaras, to cancel the Memorandum, to reverse austerity, to crush the Nazis totally, to win the goal of a left-wing government. We will have to wage a struggle—whose outcome cannot be predicted—for the programmatic and political orientation of such a government, for its class character. We will have to defend the left-wing government against attacks from the Right, but we will also have to defend the working class against the shortcomings, the vacillations, or the (far from being impossible) right-wing turns of the left-wing government. We reaffirm our view that the left-wing government is not the final goal (that can supposedly save the people, the country, etc.), but on the contrary a “transitional” step that will either open the way for the socialist emancipation or it will collapse after a dishonorable defeat.

In this context it is obvious that the developments inside SYRIZA are a crucial factor. The conference approves and reaffirms the initiatives of the outgoing central committee for the establishment of a radical-left current inside SYRIZA, through the alliance of the Left Platform.7 In the near future, DEA will support the most possible concrete constitution of the Left Platform, in organizational, programmatic, political, and tactical terms.

According to our estimates, the coming dilemmas will become more and more tough and divisive. This is why we will encourage the independent formation of the Red Network and support Rroject.gr as the “organ” for networking. We must, urgently, rally around us those SYRIZA activists who are able and willing to act in line with our tactics, views, and pace.

It addresses the question of developing a close relationship with activists who are not inside SYRIZA.

It addresses, in the most essential way, the question of the form that left-wing unity in action can take given the sectarian tactic of the Communist Party and ANTARSYA towards SYRIZA, its members, and its left-wing current.8

It addresses the question of how we must unite the social, anti-austerity struggle with the needed antifascist action.

But most importantly, it lays the foundation for addressing a crucial question: the delay in the development of social organizations in which the people themselves will put forward their own demands, tactics, participation and politicization. We understand the Popular Committees as permanent, strategic assets. We would like them to evolve as organs of struggle to overthrow Samaras, but also as “embryos” of the independent organization of the working class and the popular masses, as they work through the challenges that they will face in a situation with a left-wing government.

DEA and its perspectives
In the recent past we stood in the frontline against the attacks on the organizations of the revolutionary Left inside SYRIZA (the pressure to “self-dissolve”). After the end of the founding Congress of SYRIZA, this pressure has receded, while the revelation of the hypocritical aspects of the argument to “dissolve” makes it easier for us to stand our ground with firmness against any effort to push this issue forward again.

But this is not enough. The main goal is that we build an organization that is bigger, more serious, more rooted in the social spaces and among the left-wing activists before the decisive social and political battles ahead of us.

With this direction, the Conference authorizes the new Central Committee to work towards:

The meaning of all these initiatives is clear: The fastest possible reinforcement of DEA organizationally, politically, ideologically, and with the goal to successfully confront the coming “storms.”