The ISR is pleased to run a series of excerpts from the new Haymarket edition of Toward the United Front: Proceedings of the Fourth Congress of the Communist International. The collection is introduced by Jennifer Roesch, who situates the discussion at the Congress on the “workers’ government” in its proper historical setting, followed by an excerpt from the introduction by the volume’s editor, John Riddell, on the workers’ government debate. Riddell has chosen some selections from the proceedings of the Comintern in which delegates discussed and debated the workers’ government question, as well as the resolutions voted on at the congress specifically related to this question. 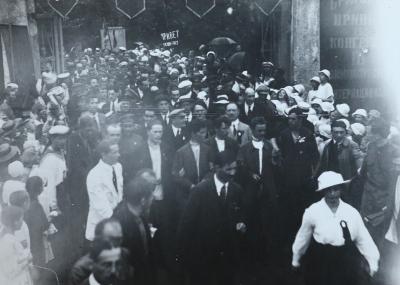 In 1917, the Russian Revolution opened up a period of revolutionary upheaval throughout the world. The crisis brought on by World War I had produced devastating conditions for the working class, including in advanced industrial Europe where some of the world’s best-paid and most well-organized workers saw their living standards plummet while millions were killed or wounded in the war. Meanwhile, the end of the war produced a wave of anti-colonial revolts. The leaderships of socialist and social democratic parties of the Second International—the international organization of all the main socialist parties in the world—exposed their own bankruptcy in this period by siding with the predatory aims of their own governments in the world war, after committing themselves on paper to working-class internationalism at congresses prior to the outbreak of war.

The Communist International, or Comintern, formed in 1919, consisted of new revolutionary socialist parties that had been created out of the left-wing groupings that had retained their internationalist and antiwar politics, broken away from social democracy, and supported the Bolshevik victory in the Russian Revolution. The main tasks of the first two congresses of the Comintern were to unite these new parties into an organized force capable of leading mass revolutionary struggles and to clarify and sharpen the differences between the reformist and revolutionary forces. With the Bolshevik victory in Russia and the fall of the Kaiser in Germany in 1918, it appeared that a direct assault on capitalism in several European countries was on the immediate agenda.

But by 1921, the revolutionary tide had begun to recede, and the Comintern’s Third Congress was compelled to grapple with new tactical orientations required by revolutionaries.1 By 1922, it was clear that the ruling classes had seized back the initiative, the working class had gone through a series of bitter defeats, and counterrevolutionary reaction was beginning to develop. In this context, the Communist parties had to turn their attention to waging defensive battles that could repel the counterrevolutionary advance while rebuilding working-class confidence and organization.

The difficulty was to achieve the broadest possible unity of action in a situation in which the working class was politically divided and the majority of workers still remained loyal to the old reformist parties. The united-front policy, first elaborated at the Third Congress and debated further at the Fourth, was developed to deal with precisely this contradiction. In a report for the Fourth Congress, Trotsky laid out the situation clearly:

The working masses sense the need of unity in action, of unity in resisting the onslaught of capitalism or unity in taking the offensive against it. Any party which mechanically counterpoises itself to this need of the working class for unity in action will unfailingly be condemned in the minds of the workers. The problem of the united front—despite the fact that a split is inevitable in this epoch between the various political organizations basing themselves on the working class—grows out of the urgent need to secure for the working class the possibility of a united front in the struggle against capitalism.2

If the Communist parties successfully pursued a united front policy, while retaining their own organizational independence, several gains could be achieved: the working class could recover its confidence, combativeness, and initiative; the Communist parties could prove in practice the resoluteness of their own policy in contrast to the hesitancy and vacillation of the reformists; and the defensive struggle could open up the possibility for a new round of offensive struggles in which the revolutionary forces would be strengthened.

The question of the workers’ government emerges as one aspect of the overall policy of the united front. The possibility of a workers’ government was raised concretely in Germany as a result of the very success of their united front work. A renewed round of struggle had led to increased electoral support for the Social Democrats, but had not yet led to the reappearance of the workers’ councils that had emerged during the revolution in 1918. In this context, the German Communists needed to decide if they would be willing to support and/or join a coalition government made up exclusively of workers’ parties but still operating within the existing capitalist system.

The supporters of this policy saw this as an opportunity to pursue the united front at the governmental level. This was a position later echoed by Trotsky: “If the united front takes itself seriously—and it is only on this condition that the popular masses will take it seriously—it cannot divest itself of the slogan of conquest of power. By what means? By every means which leads to that end. The united front does not renounce parliamentary struggle.”3

This question then became a topic of fierce debate and discussion at the Fourth Congress. As you will read from the speeches excerpted here and John Riddell’s excellent introduction, the delegates to the Congress interpreted this slogan in many different ways. The debate was frequently confused—not least because at this point the question was largely hypothetical with no concrete examples from which to draw lessons. The participants recognized that they were in unchartered waters, but also understood that new strategies and tactics were required. The German delegates Ernst Meyer and Karl Radek were particularly concerned with the challenges facing revolutionaries in the advanced capitalist countries of Western Europe, where bourgeois-democratic traditions had deep roots.

Readers can determine for themselves the strengths and weaknesses of the various positions argued at the Congress. The one thing that is clear, however, is that the Congress felt it necessary to discuss the question of governmental power in the absence of workers’ councils and the potential for an immediate transition to workers’ power. They were attempting to pursue all avenues, including parliamentary ones, for strengthening the organization and fighting capacity of the working class. In the final theses, they even recognized that there can be instances in which “a workers’ government that arises from a purely parliamentary combination, that is, one that is purely parliamentary in origin, can provide the occasion for a revival of the revolutionary workers’ movement.”

At the same time, the strict conditions they laid down for support for, and even participation in, such governments shows that there was no question that such a government could be a substitute for working-class mobilization, independent revolutionary organization, and a struggle to overthrow the capitalist state. The theses maintain that Communist participants in such a government be subject to the strictest supervision by the Party, that they must remain in very close contact with the revolutionary organizations of the masses, and that the Party must unconditionally maintain its own public identity and independence in agitation.

Today’s revolutionaries are working in a vastly different context. The mass social-democratic parties that existed in the early 1920s by and large no longer exist and the revolutionary forces are small, scattered, and in most cases largely isolated from the working class. And yet, in the context of deep economic crisis and instability the last several years have seen a renewal of struggle—albeit uneven and sporadic. In Greece, where the crisis has led to more than twenty-nine general strikes, the situation is particularly developed. In this situation the slogan of a left-wing government was posed concretely for the first time in several decades. And following the election of SYRIZA in January of this year, the challenge of how to relate to such a government has become a reality for the revolutionary Left in Greece.

It is in this context that we believe there is much to learn from the discussions of this question at the Fourth Congress. The situations are, of course, not at all the same. But we have much to learn from the methods by which the Comintern evaluated these questions and the combination of tactical flexibility and creativity with firm political principles and independence that they employed. Antonis Davanellos, a leader of the Greek International Workers’ Left (DEA)—one of the far-Left parties inside SYRIZA, the Coalition of the Radical Left that won Greece’s national elections in January—has pointed out that many revolutionaries have seen the discussion of the workers’ government as an “unfortunate lapse” on the part of the Comintern and as a question that has been settled, in the negative, by subsequent events.

In contemporary history, the Left was tested many times on this question, and it paid a heavy cost for this vacuum in its strategy and tactics. In Chile, in the beginning of the seventies, the electoral victory of Unidad Popular, despite the intentions of Salvador Allende and the Communist Party of Chile, triggered a sharp escalation of class struggle. This led to a tragic defeat because none of the mass parties of the Left had a clear direction on the character of a left-wing government, and the only road to victory, which was the transitional fight for socialist emancipation. The Left was again confronted by the prospect of governmental power as a crucial step towards the socialist rupture in Portugal in 1974 and in Italy in the mid-seventies.4

Today, revolutionaries are confronting this question again and would do well to go back to study these discussions. We hope that providing this material can help a wider audience to do so. In 1922, Zinoviev warned that, “In the search for a rigorous scientific definition, we might overlook the political side of the situation.” In other words, we cannot go back to the Fourth Congress in hopes of a ready-made prescription but must analyze the concrete conditions we face today. The questions, fiercely debated by the delegates in 1922, remain unsettled; it remains for a new generation of revolutionaries to take them up anew.